In a memo dated March 23, CMS announced a freeze on standard Survey activity and a requirement for states to focus on Targeted Infection Control Surveys and Complaint Surveys at the Immediate Jeopardy level.  On April 24, another memo outlined that no Survey conducted after March 4 would be used to change a facility’s Survey Star Rating, and that the results of any survey conducted after March 4 would eventually be published.

Read more about this change.

Then on June 1, CMS published a memo further detailing changes to the Survey process for Skilled Nursing Homes.  It announced that state funding through the CARES act will be tied to the state’s Targeted Infection Control Survey completion rate, and that homes in states reaching phase 3 of CMS’s re-opening guidance may begin conducting a wider set of Surveys again.

Until now, it’s been unclear how past Infection Control violations would affect homes moving forward, and now CMS has provided clarity.  StarPRO’s tools will be updated shortly to reflect this change.

On June 4, along with the release of COVID-19 data and the regular monthly updates, CMS released summary statistics for all Surveys conducted between March 4 and May 29.  According to this data, approximately 54% of homes nationwide have had a Targeted Infection Control Survey, with significant variation between states.  The same file also contains full Survey details for all Surveys conducted between March 4 and April 29.  Included in this dataset is deficiency-level detail for both Targeted Infection Control Surveys and Complaint Surveys at the Immediate Jeopardy level, as well as PDF versions of the Inspection Reports.  Our analysis of this period shows 5743 Surveys of 3458 homes, which represents about 23% of homes nationwide.  Only about 10% of these surveys turned up any deficiencies. Some facilities have had multiple surveys in that short time period, with one having 20 separate Surveys!

Critically, there’s nothing in the data that differentiates between the Infection Control Surveys and the Complaint/IJ Surveys. However, the F-Tags are included, which StarPRO will use to help facilities understand if they may be facing enforcement actions.  It’s still unclear how – or if – CMS will apply these Surveys towards the Star Rating once it’s unfrozen.

When CMS publishes the next month’s data at the end of June, we expect to see the full 54% of homes surveyed, and we’ll report on our findings again.

Contrary to what CMS says in their memo, these survey results are not visible within Nursing Home Compare.  For anyone looking to understand a facility’s results, the only current option is to download the full file and search.  As an easier alternative, we’ve updated our StarAnalyzer product with these full Survey details.  Run a search today to check up on how facilities have fared. 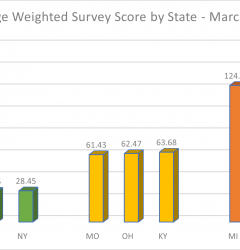 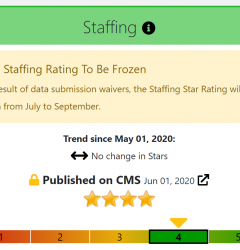 Staffing Star Rating and some Quality Measures to 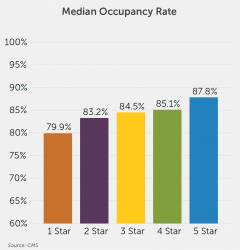