In order to remain certified to treat Medicare and Medicaid patients, each Nursing Home is subject to an annual Health Inspection, or Survey. Each year, a team of independent state examiners inspect patient safety, physical hazards, cleanliness and regulatory compliance during an unannounced visit.

For each shortcoming on the inspection, the facility is issued a deficiency.  Points are assigned based on the scope and severity of the deficiency.  In order to calculate the Survey Star Rating, the points from the past 3 survey cycles are totaled, weighted, and compared against all the other homes in a given state.

Afterwards, surveyors may conduct a follow-up or Revisit Survey to ensure that any deficiencies found have been corrected.  If they have not, repeat revisits may be required.  Each revisit beyond the first carries an additional penalty on the total points for any deficiencies not corrected:

In addition, surveyors may conduct ad hoc Complaint Surveys in response to official complaints lodged against the facility at any point during the year.  These surveys may result in additional deficiencies.

At the onset of the Covid-19 pandemic, CMS halted normal Survey activity and began conducting thousands of Focused Infection Control Surveys (FICs) to measure each facility’s preparedness and effectiveness at preventing the spread of infectious diseases.  Per their announcement in December 2020, CMS elected to incorporate the results of Focused Infection Control Surveys into the Survey Rating in a manner similar to Complaint Surveys.  We expect the FICs to continue, so facilities need to remain vigilant in order to avoid deficiencies, repeat visits, and fines.

The addition of the Focused Infection Control deficiencies into the Survey Star Rating is new, and we’re still working on understanding all the ways it might impact things.  Read our blog post for a detailed analysis of what we’re seeing so far in the data.

The chart below illustrates the different types of deficiencies that can be cited on a Survey, ordered by Scope (how many residents are affected) and Severity (how impactful the deficiency is):

Below is an example of a Survey with several deficiencies of varying scopes and severities: 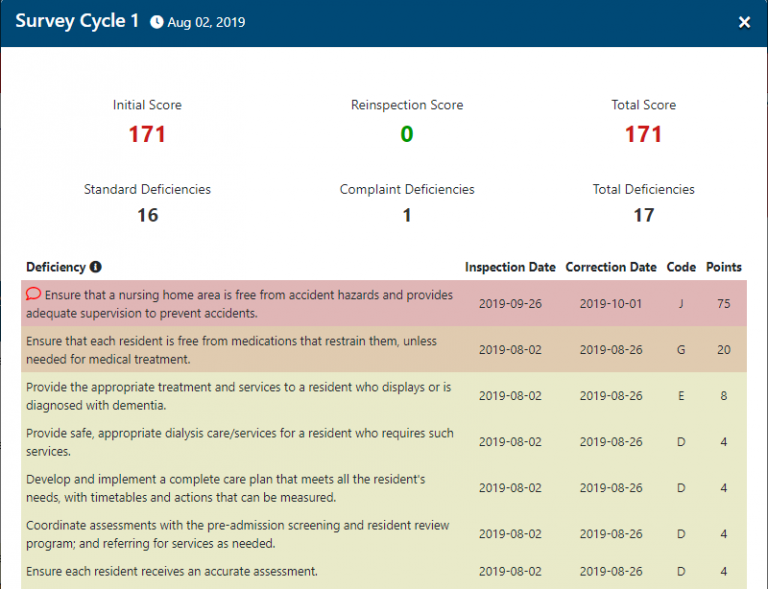 Inside StarPRO's applications, we color-code deficiencies based on their severity, and we also make sure to highlight deficiencies that may have an impact beyond just the survey score. 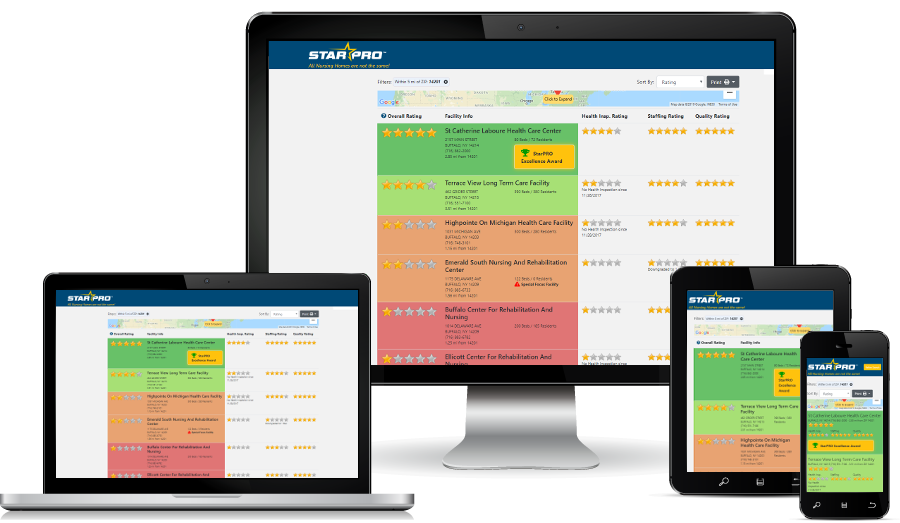 In order to determine the Survey Star Rating, each Inspection’s total points are weighted:

The weighted scores are then added together to create the Weighted Survey Score.  See the below chart for an example facility. 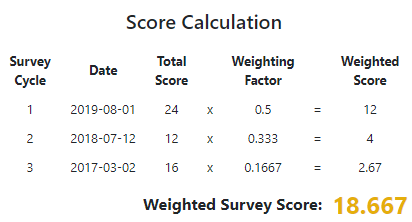 Each facility’s Weighted Survey Score is then compared against a matrix for each state to determine the Star Rating.  For each state, the cutpoints that make up the matrix are calculated based on all the other facilities in the state:

See below for how this sample facility stacks up in their state: 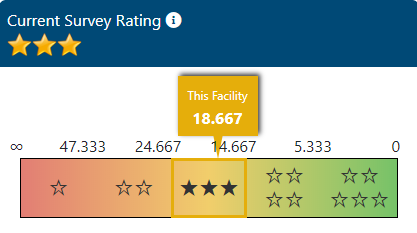 Each month, the cutpoints for each state are adjusted based on any new surveys that come in, to ensure that the above 10/70/20 rule is being applied continuously.

Interestingly, this can lead to some facilities gaining or losing a star without even having a new survey!  As a result, facilities with Weighted Survey Scores close to the cutpoints need to pay extra attention to the monthly changes.

CMS has recently added new guidelines for facilities with a history of severe Abuse deficiencies.  Facilities with this designation are capped at 2 Stars for the Survey Rating, no matter how much higher they may have been.  Click here to read more about the Abuse flag.

While CMS sets the survey guidelines at the federal level, it’s up to each state’s health department to determine how to interpret and apply the guidelines.  As a result, survey results can vary wildly between states.  See the map below for details:

At first glance, it may seem that states like Washington and New Mexico are “bad”, and states like New Hampshire are “good.”  But high vs. low only tells part of the story.

Homes in high scoring states expect a higher count and severity of deficiencies in their Surveys, and they’re graded against their peers in the state.  Recall that each state has a different matrix and set of cutpoints, with the top 10% earning 5 stars, the bottom 20% earning 1 star, and the middle 70% making up the rest.  The result: a facility with a Weighted Survey Score of 36 would be a  1-star in New Hampshire, but they’d be 5 stars in New Mexico! 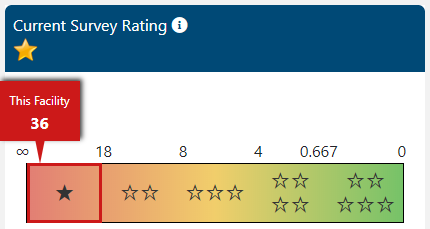 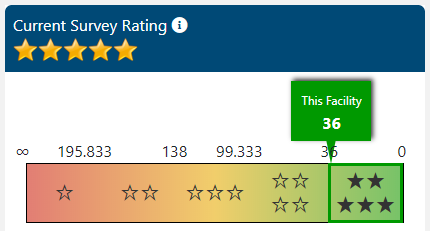 Industry professionals know that healthcare is a local business, and that sometimes means comparing homes across state lines.  But it’s important to remember that a facility’s Survey results always need to be considered only in the context of their own state, not their region.

Subscribe to our newsletter to stay informed about changes to surveys, cutpoints, and more.